A stepwell, as you might intuit, is a well that you reach by descending a set of steps. Chand Baori is a stepwell in northwestern India, and it’s quite a sight to behold. Check out the video below, courtesy of Great Big Story:

This headline does not, in fact, refer to the Bush Administration’s conduct vis-a-vis the Iraq war (as accurate as it may be). Instead, according to Wikipedia, it is “a common name for a bug present in the function IsTextUnicode of Microsoft Windows, which causes a file of text encoded in Windows-1252 or similar encoding to be interpreted as if it were UTF-16LE, resulting in mojibake.”

In other words, when you type “Bush hid the facts” in a new Notepad document, save it, close it, and reopen it, the characters “畢桳栠摩琠敨映捡獴” inexplicably appear instead. A rather strange error, and certainly one that will unnerve conspiracy theorists! Try it out for yourself, if you’re using Windows NT, Windows 2000, or Windows XP (the error doesn’t occur in other versions of Windows). According to Wikipedia, other text strings that have similar effects include “this app can break”, “acre vai pra globo”, and “aaaa aaa aaa aaaaa”

If you’re anything like me, you’ve probably spent a great deal of time on Google Maps / Google Earth just browsing around and seeing the sights. MapCrunch.com, though, makes all of that much more exciting: hit a button, and it will take you to a random street-view location somewhere in the world. It’s easier seen than explained, so check it out (today’s location-of-the-day is especially strange).

Check it out. I bet whoever left this hates shopping for shoes: 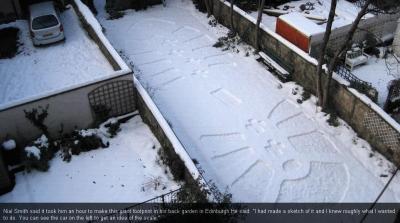 Click for the full effect. (Image from the BBC.)

Here’s a brief three-item digest of the latest strange happenings and interesting things from around the globe:

… Occurred nearly 200 years ago, in London. From Wikipedia:

The Berners Street Hoax was perpetrated by Theodore Hook in the City of Westminster, London, in 1810.

On 27 November, at five o’clock in the morning, a sweep arrived to
sweep the chimneys of 54 Berners Street, the home of Mrs Tottenham. The
maid who answered the door informed him that no sweep had been
requested, and that his services were not required, and the disappointed
tradesman went on his way. A few moments later another sweep presented
himself at the door, then another, and another, 12 in all. After the
last of the sweeps had been sent away, a fleet of carts carrying large
deliveries of coal began to arrive, followed by a series of cakemakers
delivering large wedding cakes, then doctors, lawyers, vicars and
priests summoned to minister to someone in the house they had been told
was dying. Fishmongers, shoemakers, and over a dozen pianos were among
the next to appear, along with “six stout men bearing an organ”.
Dignitaries, including the Governor of the Bank of England, the Duke of York, the Archbishop of Canterbury and the Lord Mayor of the City of London
also arrived. The narrow streets soon became severely congested with
disgruntled tradesmen and onlookers. Deliveries and visits continued
until the early evening, bringing a large part of London to a
standstill.[1]

Hook had bet his friend Samuel Beazley
that he could transform any house in London into the most talked-about
address in a week. To achieve his goal he had sent out 4,000 letters
purporting to be Mrs Tottenham, requesting deliveries, visitors, and
assistance. Hook had stationed himself in the house directly opposite
54 Berners Street, and he and his friend had spent an amusing day
watching the chaos unfold.[1]

You really can’t top that.

I’ll keep this brief – check out this amazing NASA footage and high-resolution photographs of the sun. Speaking of crabs, check out the Coconut Crab – the world’s largest terrestrial arthropod. The Coconut Crab is indigenous to tropical islands throughout much of the Pacific, and can grow to immense proportions: specimens 6 feet long weighing 30 pounds have been recorded. The Coconut Crab’s pincers, too, are extremely strong – they can (naturally) crack coconuts, and their front claws can lift up to 64 pounds.

The Coconut Crab, according to Wikipedia,

has a special position in the culture of many human societies which
share its range. The coconut crab is admired for its strength, and it is
said that villagers use this animal to guard their coconut plantations.
The coconut crab, especially if it is not yet fully grown, is also sold
as a pet,
for example, in Tokyo.[35]
The cage must be strong enough that the animal
cannot use its powerful claws to escape.

Interestingly, the Coconut Crab is also known as the “robber crab,” because “some coconut crabs are rumored to steal shiny items such as pots
and silverware from houses and tents.”

There’s not much more that I can say about these fascinating creatures. If you’re not convinced that they are amazing, please see for yourself: 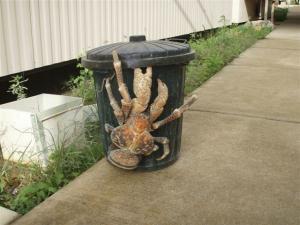 Its scientific name is Dromia personata, and it typically lives in underwater caves. Creepy, isn’t it? Sinister, you might even say. There’s something menacing about it’s gaze. 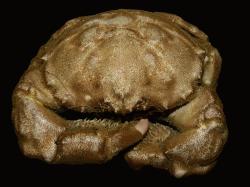 Hello everyone. Following are some strange, interesting, and bizarre things from around the internet: Discovery.com reports on the makings of what is sure to be a showdown for the ages:

Should the bears meet, the grizzlies could do some serious damage.

No doubt about that, but polar bears have a definite size advantage. In one-on-one confrontation, my money’s on the polar bear. My question is this: what happens if, rather than fighting, the two species breed? And fuse into some unholy sort of unstoppable ultra-bear with an insatiable taste for human flesh?

BBC News reports that the

Prehistoric seas were filled with giant
plankton-eating fish which died out at the same time as the dinosaurs,
new fossil evidence suggests.

Scientists from Glasgow, Oxford
and the United States have identified fossil evidence which shows the
fish existed between 66 and 172 million years ago.

It also reports that

A Japanese spider crab believed to be the biggest
ever seen in Britain is set to go on show at Birmingham’s National Sea
Life Centre.

In the meantime, the Open_Sailing project is trying to develop (via open source) solutions to enable humans to inhabit the oceans. From their website:

I’m not so sure that I’d be eager to live in the ocean, given its other denizens. The Open_Sailing project sounds fascinating anyhow, though – they’re developing, among other things, “an architecture that behaves like a super-organism, reacting to the
weather conditions and other variables, reconfiguring itself” and “a mobile aquaculture to sustain human long term life at sea.” Check out their concept video below: