In 2018, we wrote about Antarctica’s unsettling “blood waterfall.” Now, you can check out a fascinating short documentary about the crimson cascade filmed in 2020:

The Great Lakes, though their water is fresh, are so large they are often described as inland seas. Collectively, the Great Lakes region is sometimes called the “Third Coast”1 — and given its 5,300 miles of coastline2, it’s more than just a branding attempt to put the area on equal footing with the East and West coasts. But just how far does the comparison extend?

Far enough: even the lesser Great Lakes have seen waves large enough to make even the saltiest of sailors blanch. Waves on Lake Michigan can reach 20 to 23 feet3. More than 100 meteotsunamis — tsunami-like waves generated by rapid changes in barometric pressure — occur across the Great lakes each year. And in October 2017, the Great Lakes Observing System’s buoys recorded the largest waves it had ever detected: 28.8 feet on Lake Superior4. (The system’s records date back to 1979.)

Below, you can see footage of some truly monstrous waves on Lake Superior from 2018:

“What the heck is this!” was the reaction of one glaciologist when he first encountered glacier mice.1  Long known to researchers but still not fully understood, glacier mice might best be thought of as bundles of moss that form pearl-like around pebbles or other impurities on glacial surfaces.

Found as far afield as Alaska, Chile, and Norway, glacier mice were first described in 1951 by Icelandic meteorologist Jón Eyþórsson, who referred to them as jökla-mýs (Icelandic for “glacier mice”).2

What’s particularly curious about these “critters,” however, is that they seem to move around much more than any ordinary moss might.

The movement of the moss balls was peculiar. The researchers had expected that the balls would travel around randomly by rolling off their ice pedestals. The reality was different. The balls moved about an average of an inch a day in a kind of choreographed formation — like a flock of birds or a herd of wildebeests.

The researchers considered several possible explanations. The first, and most obvious one, is that they just rolled downhill. But measurements showed that the moss balls weren’t going down a slope.

“We next thought maybe the wind is sort of blowing them in consistent directions,” says Bartholomaus, “and so we measured the dominant direction of the wind.”

That didn’t explain it either, nor did the pattern of the sunlight.

You can listen to an 11-minute NPR story about glacier mice here:

There are more than 500 hand-operated water pumps throughout the 68,000 acres of the Cook County Forest Preserves encircling Chicago. Most are utterly ordinary. But there’s one pump in Schiller Woods — a forest preserve in suburban Schiller Park, just to the northwest of Chicago — that some consider very special indeed.

The Schiller Park pump, in fact, regularly attracts crowds of people filling gallon jugs and other odd containers on any given day. What draws them to this pump in particular? The water, they say, has special properties: it energizes you; it makes you younger; it clears up chronic illnesses. Some describe the water as holy; others say they just like the taste.

Forest Preserve officials, for their part, claim there’s nothing particularly special about the well. To be sure, the water comes straight from the ground, meaning it contains none of the chemical additives — fluoride, etc. — that are found in city water. Because the pump is so popular, it is tested more regularly than others in the Forest Preserve system. According to the Illinois Department of Public Health, its water is “a little low in iron and somewhat low in other trace minerals” but otherwise not distinctive. Still, the Schiller pilgrims cannot be dissuaded from faithfully toting their bottles and buckets to and from the well to refill week after week.

Check out a short video about the pump put together by WBEZ’s Curious City, below:

Spotted in a pond in Chicago’s Humboldt Park: a four-to-five foot long crocodilian. The latest Chicago-area gator-sighting since a four-footer was found swimming in Lake Michigan last October, residents observed the reptile earlier this afternoon and Chicago Police and Animal Care and Control — though skeptical at first — later confirmed the report.

From the Chicago Tribune:

Chicago officials confirmed an alligator was living in Humboldt Park Lagoon after several people reported seeing the animal there Tuesday morning and others shared possible photos of it.

Chicago police were called to the 1400 block of North Humboldt Drive about 12:15 p.m. after someone called 911 “saying they saw a Facebook post saying there is an alligator in the lagoon area,” said Chicago police spokeswoman Karie James.

Police had “independently confirmed the alligator is in the lagoon and state reptile specialists” said it was 4 to 5 feet long, police spokesman Anthony Guglielmi said in a tweet. The animal was expected to be trapped Tuesday night “and relocated to a zoo for veterinary evaluation.”

Sounds like the makings of a summertime blockbuster! Hopefully the alligator will be captured and relocated without too much fuss.

Nature’s marvels are boundless, and one of its most visually disturbing is a certain blood-red cascade found in Victoria Land, East Antarctica (aptly named “Blood Falls“). Fortunately for the squeamish, it’s not actually blood:

Blood Falls is an outflow of an iron oxide-tainted plume of saltwater, flowing from the tongue of Taylor Glacier onto the ice-covered surface of West Lake Bonney in the Taylor Valley of the McMurdo Dry Valleys in Victoria Land, East Antarctica.

Iron-rich hypersaline water sporadically emerges from small fissures in the ice cascades. The saltwater source is a subglacial pool of unknown size overlain by about 400 metres (1,300 ft) of ice several kilometers from its tiny outlet at Blood Falls.

The reddish deposit was found in 1911 by the Australian geologist Griffith Taylor, who first explored the valley that bears his name. The Antarctica pioneers first attributed the red color to red algae, but later it was proven to be due to iron oxides.

Surely a sight to see! Given the remote location of Blood Falls, though, it’s unlikely to appeal as a tourist destination to any but the hardiest and most well-heeled of travelers.

A kayaker on Lake Michigan spotted something shocking early Monday morning: a 4-foot alligator paddling in the water nearby. The Chicago Tribune reports:

The kayaking fisherman, David Castaneda, reported the animal to Waukegan’s Animal Control, the Lake County News-Sun reported. The animal had its mouth taped shut, and initially reports described it as a caiman, but the Wildlife Discovery Center later confirmed it was indeed an American alligator.

Dave Bernier, a general curator at Lincoln Park Zoo, suspects someone brought it to the area recently and that the gator hasn’t had to endure a Chicago January.

“It would never be able to survive the winter here,” Bernier said.

You can see the kayaker’s video of the encounter below:

This isn’t the first time gators have been spotted in Chicagoland: another small alligator was captured in the Chicago River back in 2010. Given that these cold-blooded creatures can’t survive winters at these latitudes, it is likely they were pets that escaped or were released into the wild.

Alligators aren’t the only exotic animals that are purported to sometimes lurk in Lake Michigan. Persistent urban legends tell of occasional shark sightings (including a supposed 1955 bull shark attack). (None of these instances have ever been confirmed, of course, and experts consider the aforementioned attack unlikely to have ever occurred.)

As if the creature’s physical characteristics weren’t interesting enough on their own, researchers gave it one of the coolest names in the animal kingdom: the ninja lanternshark. This shark can be found in the deeps off the Pacific coast of Central America, and grows to about 1.5 feet in length.

Like other lanternsharks, it produces light with special organs in its body, which is likely used to communicate with other sharks, for camouflage and perhaps to attract prey. The scientists who first found the fish, from the Pacific Shark Research Center in California, gave the species the technical name Etmopterus benchleyi. It’s named after Peter Benchley, the author of Jaws. […] The animal lives in the waters off the continental slope, at depths of 0.5 to 0.9 miles deep, where it is very dark. It presumably eats small fish and crustaceans although scientists don’t yet know hardly anything about its diet or behavior.

You can read more about this intriguing creature here!

Here’s another story that fulfills every stereotype about life in Australia.

Eric Holland from Thurgoona in New South Wales was relaxing in his shed earlier this week, when he came across a 1.5 metre (5 foot) goanna lizard hanging on the side of his house. 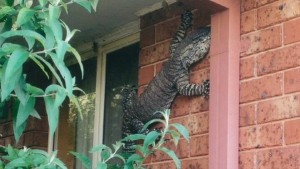 “Well it was a bloody big shock mate,” Holland told radio station 2GB in an interview on Friday morning. “I nearly trod on the bloody thing.”

The goanna is actually a mature Lace Monitor, which can grow to 2 metres (6.5 feet) long and weigh 20 kilograms (44 lbs).

Indonesia’s Mount Sinabung, a stratovolcano located in North Sumatra, has been dramatically erupting on and off since 2010. (Incidentally, I climbed this volcano in late 2011 — between eruptions, of course.)

Recent eruptions have been so sustained and severe that a number of nearby villages have been abandoned — declared by Indonesian authorities, as The Atlantic reports, “too dangerous to inhabit.” Numerous villages such as Guru Kinayan, Simacem, Kuta Gugung, and Sibintun now sit empty, covered in ash and rapidly being reclaimed by nature, as the images below show:

Formerly submerged under 60 feet of water, the ongoing drought in the western United States has left the ghost town of St. Thomas, Nevada, once again exposed to the air.

Lest anyone forget, the drought in California and across the Southwest is still raging on. And one of the places where its effects can be observed most clearly is Nevada’s Lake Mead.

The nation’s largest reservoir has hit a series of troubling milestones over the past year, sinking to a record low in late June. Now, in the latest benchmark for the new Lake Mead, a town that flooded shortly after the completion of the Hoover Dam in 1938 has literally risen from the depths.

The ghost town — once called St. Thomas, Nevada — was founded as a Mormon settlement in 1865 and had six bustling businesses by 1918, according to Weather.com. But for nearly a century, it’s been uninhabited and uninhabitable, existing mostly as an underwater curiosity.

You can see more pictures here.