Here’s an offbeat article that I’ll let speak for itself:

One dog apparently has learned a new trick: how to drive a semi-truck. Customers at a Minnesota gas station saw a golden Labrador retriever appear to drive the semi across a road Friday. 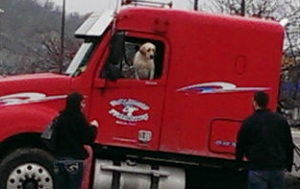 Mankato police say the idling truck apparently was put into gear, then went through a parking lot, across the street and over a curb. The Free Press of Mankato reports a passer-by discovered the dog sitting in the driver’s seat when he jumped into the truck to stop it. […]  The driver had left the unoccupied truck running in a nearby parking lot.

(From the Chicago Tribune!)