“We’re staring,” reports The Weather Channel, “at a powerful storm that is poised to rake high winds,
severe t-storms, and, yes, even wet snow in parts of the Midwest.” Some are calling it a “land hurricane.” There are currently tornado warnings in 25 different spots across the path of the storm. From The Weather Channel: 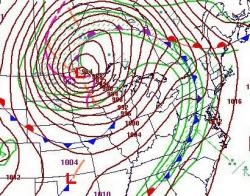 Meteorologists know this will be intense due to expected lowest central
pressure of the low in western Ontario bottoming out in the neighborhood
of 960-970 mb.  This is a storm potentially as strong or stronger than
the infamous “Edmund Fitzgerald” storm in Nov. 1975 and an even stronger
version almost exactly 23 years after that in Nov. 1998.

(See the full forecast here.) Rather than “land hurricane,” the correct term for the phenomenon we’re seeing is (unlikely as it sounds) “bomb cyclogenesis.” As related by boingboing:

Basically, bomb cyclogenesis
is the formation of an over-land cyclone (“cyclogenesis”) in a
dramatically short period of time (“kablooey”). The phenomenon might be
involved in the formation of Atlantic Nor’easters, and was the force
behind some of the biggest blizzards of the mid-20th century. In fact, Minnesota Public Radio’s Updraft blog is going so far as to call this incoming weather system a “land hurricane”
(“telegram”). The Eastern side of Lake Superior is expecting 25-foot
waves this afternoon. Should be exciting. And we’ve all learned a new
word.