Hail is not unheard of in severe summertime thunderstorms. And yet you definitely don’t expect a city in southwestern Mexico to be completely buried under multiple feet of ice in late June. “Incongruous” is a word that readily comes to mind!

Guadalajara had been enjoying a sweaty summer for the past few weeks until the weekend brought a shocking surprise.

The Mexican city woke up Sunday morning to more than 3 feet of ice in some areas after a heavy hailstorm swept through the region.

Now, that sounds like a lot. But the visuals are even more striking. Check out video footage of the ice below:

While cranberries have been cultivated and consumed by Native Americans since pre-Columbian times – and have long been associated with Thanksgiving celebrations in the United States – the fruit’s position on our harvest table has not always been so secure. 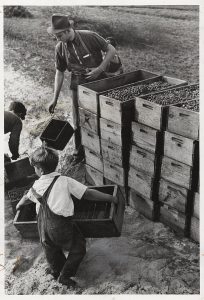 Near the end of the second Eisenhower administration, fears of widespread chemical contamination prompted the Great Cranberry Scare of 1959. A few weeks before Thanksgiving, Secretary of Health, Education, and Welfare Arthur S. Flemming announced that

The Food and Drug Administration today urged that no further sales be made of cranberries and cranberry products produced in Washington and Oregon in 1958 and 1959 because of their possible contamination by a chemical weed killer, aminotriazole, which causes cancer in the thyroids of rats when it is contained in their diet, until the cranberry industry has submitted a workable plan to separate the contaminated berries from those that are not contaminated.1

American consumers panicked: a “fifty-million-dollar-a-year business collapsed overnight [and] sales of fresh cranberries […] dropped sixty-three per cent from the year before.” Fearful of poisoning, cranberries vanished from Thanksgiving tables that year; even the Eisenhowers declined to serve them at the White House dinner.2

Afterward, two things became clear. First, that the contamination was not widespread, and that scientists had simply erred on the side of caution since there was no way for consumers to determine on short notice where their cranberries had come from. Second, the cranberry industry concluded that it could not depend on Thanksgiving sales alone – prompting the introduction and marketing of cranberry juices that could be sold year-round.3