The Golden Book of Cleveland was as big as a queen sized bed, contained more than half a million signatures, and weighed more than two tons. If it still exists, it is the largest book in the world. But its whereabouts have been unknown since 1937.

Cleveland, Ohio played host to the Great Lakes Exposition of 1936-37, its own effort at a World’s Fair that attracted more than 7 million visitors over its two-year run. The expo was “conceived as a way to energize a city hit hard by the Great Depression” and featured rides, sideshows, botanical gardens, cafes, art galleries, and other attractions. Notable among these was the Golden Book of Cleveland, billed as the largest book in the world. From Cleveland Magazine:

The Golden Book of Cleveland, official registration book of the Great Lakes Exposition, stood inside the main entrance on St. Clair Avenue during the expo’s first season. It was 7 feet by 5 feet and 3 feet thick, with 6,000 pages — about the size of a queen-size bed. It weighed 2 1/2 tons. The Golden Book had spaces for 4 million signatures. By Aug. 17, 1936, halfway through the expo’s season, 587,400 people had signed it.

According to Cleveland Magazine, the expo’s organizers intended to donate the book to a local historical society. (“The idea was that fairgoers or their descendants could visit Cleveland again years later, look on the page number recorded in their booklet and find their signature.”) The book disappeared from expo coverage in Cleveland newspapers after August 1936, however, and after the expo ended it vanished from the public record entirely. Cleveland Magazine checked three libraries’ archives, a dozen books of newspaper clippings from the expo, more than a dozen Cleveland historians, the Western Reserve Historical Society, and the Ohio Historical Society, and none could account for the book’s ultimate fate.

So where might Cleveland’s lost bed-sized book have ended up? Some speculate that it was simply destroyed following the expo. However, after Cleveland Magazine published an article about the book in 2006, a man named Al Budnick claimed that his father had sold the book to a Tucson doctor in the early 1950s. While no physical trace of the book (nor the identity of its alleged purchaser) has since turned up, you can read more in a 2007 article in the Arizona Daily Star.

This is incredible. A lighthouse near Cleveland has apparently been encased in ice by spray from Lake Erie. Have a look at this video footage:

There’s an article to match here. 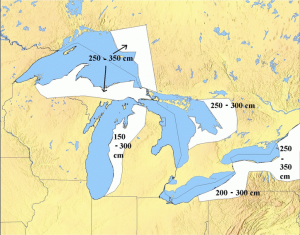 Northeast Ohio (where I hail from) has seen more than a week of non-stop snow, and as I write this, freezing rain is glazing the deep drifts like a mad baker on a donut-spree. Except this glaze is dangerous, not delicious, and the snow itself is far less delightful than dessert pastries. I may sound bitter, or perhaps unhinged, but a couple decades in the Snow Belt will do that.

Snow and cold weather have recently propelled the Southern United States into the headlines (apparently it’s so cold, iguanas are falling out of the trees – not to mention, of course, the very real threat of crop failure). I defy anyone to show me a headline highlighting heavy snowfalls in the Great Lakes region (the one above doesn’t count, cheater). There aren’t any, because it’s not really news – just another day in the life for those of us here in the Snowbelt.

The Great Lakes Snowbelt is so snowy due to – surprise! – the Great Lakes. Much of the Snowbelt receives more than 100 inches of snow per year; some places regularly see more than 150 inches annually (the record winter for my hometown of Chardon, OH, ’59-’60, saw 161.45 inches, followed closely by what my family calls the Great Snow of ’96). These impressive tallies are made possible by a mechanism known to meteorologists and the denizens of the Snowbelt as lake-effect 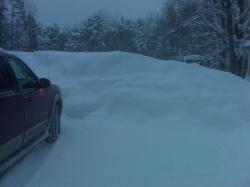 snow. Basically, cold air blows over the warm lakes and collects moisture, which it then releases on their southeastern shores in the form of snow. This continues until the lakes freeze. Sometimes they don’t freeze at all. Even when they do, though, we’re still not safe: iced-over lakes couldn’t stop the deadly Great Lakes Blizzard of 1977, which occurred when strong winds blew accumulated powdered snow off of frozen Lake Erie (little new snow actually fell – but winds of 60 mph made that fact irrelevant).

Really, though, it’s silly to complain. There’s nothing we can do about it, and it makes the region rather unique – supposedly the only other comparable places in the world, in terms of winter weather, are the west side of the Japanese island of Hokkaido and the west side of Russia’s Kamchatka Peninsula (other spots like Salt Lake City, of course, experience lake-effect snow, but to a considerably lesser degree). And it toughens us up, too; no matter where I go, barring the Himalayas, Siberia, or the above, the winter weather won’t seem half as bad by comparison.

At any rate, though, those southern iguanas have little to grumble about. They should try a winter up here sometime.