Lake Peigneur was once a shallow freshwater lake in Louisiana. Today, it is a deep saltwater lake. What happened? It’s difficult to believe. From Wikipedia:

An unusual man-made disaster on November 20, 1980 changed the structure
of the lake and surrounding land.

In 1980, when the disaster took place, the Diamond
Crystal Salt Company operated the Jefferson Island salt
mine under the lake, while a Texaco oil
rig drilled down from the surface of the lake searching for petroleum.
Due to a miscalculation, the 14-inch (36 cm) drill bit entered the
mine, starting a remarkable chain of events which at the time turned an
almost 10-foot (3.0 m) deep freshwater lake into a salt water lake with a
deep hole.

It is difficult to determine exactly what occurred, as all of the
evidence was destroyed or washed away in the ensuing maelstrom.
The now generally accepted explanation is that a miscalculation by
Texaco regarding their location resulted in the drill puncturing the
roof of the third level of the mine. This created an opening in the
bottom of the lake, similar to removing the drain plug from a bathtub.
The lake then drained into the hole, expanding the size of that hole as
the soil and salt were washed into the mine by the rushing water,
filling the enormous caverns left by the removal of salt over the years.
The resultant whirlpool sucked in the drilling platform, eleven
barges, many trees and 65 acres (260,000 m2) of the
surrounding terrain. So much water drained into those caverns that the
flow of the Delcambre Canal that usually empties the
lake into Vermilion Bay was reversed, making the canal a
temporary inlet. This backflow created, for a few days, the tallest
waterfall ever in the state of Louisiana, at 164 feet (50 m), as the
lake refilled with salt water from the Delcambre Canal and Vermilion
Bay. The water downflowing into the mine caverns displaced air
which erupted as compressed air and then later as 400-foot (120 m) geysers up
through the mineshafts.

Fortunately, all the miners and bystanders escaped this harrowing incident unscathed. Even this description, though, doesn’t do the event justice. Watch this brief clip from the History Channel:

In line with our earlier mention of the WWII battleship 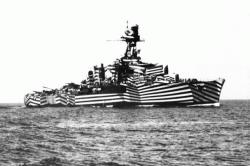 that disguised itself as a tropical island, here’s a particularly interesting and informative article about ship camouflage during WWI. Apparently, those wacky zebra-stripe patterns weren’t just stylin’ decoration – the “bright, loud colors and contrasting diagonal stripes make it
incredibly difficult to gauge a ship’s size and direction.” Check out the article here.

This camouflaged Dutch ship successfully disguised itself as a small
tropical
island and avoided the Japanese Navy after the Battle of the Java Sea.

HNLMS Abraham Crijnssen was stationed in the Dutch East Indies when WW
II began. After the destruction of the Allied Fleet by the Japanese
during the Battle of the Java Sea in February 1942, Crijnssen’s captain
was ordered to escape with his ship to Australia. Covered with tree
branches, the minesweeper crossed the Japanese naval lines camouflaged
as a tropical island.