Our loyal reader Donna sends word of an impressive godly monument shaped like a familiar variety of domesticated fowl. Rising high above the tropical canopy in Magelang, Central Java, Gereja Ayam (which translates literally as “chicken church,” and is not to be confused with a similarly-named fast food chain) was “originally built as a prayer house by 67-year-old Daniel Alamsjah after he received a divine message from God.” While the building more closely resembles a chicken, it was actually intended to look like a dove. You can read and see more here — and in the meantime, check out the video below:

DNAInfo|Chicago reports that HitchBOT, a hitchhiking robot, is en route to Chicago — if the kindness of strangers allows, of course. Yes, this is as fantastic as it sounds. The future has finally arrived, and it is one in which shiftless hobo-robots use their robo-thumbs to traverse our dusty highways.

Chicagoans may soon have the chance to meet HitchBOT, a Canadian hitchhiking robot setting out on a journey across the U.S. with a stop in Chicago.

The robot, made out of a beer bucket and pool noodles, relies on the kindness of strangers to pick it up and has made several successful trips abroad. […] The robot has a GPS and a camera, microphone and speaker, and can access Wikipedia knowledge for its conversations. It posts to social media to track its progress and adventures, but won’t post a photo of a person without permission. HitchBOT also displays its “emotions” via an LED face. It charges by solar panel and car powerboutlet, and will let drivers know if it gets low on battery.

Check out this video explaining HitchBOT:

What’s the basic raison d’être behind HitchBOT? According to its creator, the project is an exploration of trust: between robots and humans. According to Dr. David Harris Smith, co-creator of HitchBOT (quoted in Boston Magazine), “trust is a very important part of this experiment […] There’s this issue of trust in popular media where we see a lot of dystopian visions of a future with robots that have gone rogue or out of control. In this case, we’ve designed something that actually needs human empathy to accomplish its goals.”

David Cameron has flown into the debate about culling seagulls, calling for a “big conversation” about the issue. The prime minister’s call follows an attack on a pet tortoise in Cornwall this week. Liskeard resident Jan Byrne said that gulls swooped on tortoise Stig, who died two days later from his injuries.

“They turned him over and were pecking at him. We were devastated,” she told the BBC. There have been two reports of seagulls attacking and killing dogs in England in the past three months.

Cameron told BBC Radio Cornwall: “I think a big conversation needs to happen about this and frankly the people we need to listen to are people who really understand this issue in Cornwall, and the potential effects it is having.”

You can read the original article here.

It’s a dream come true. Who doesn’t wish that there was some place they could go, as an adult, to dive into a giant pit of plastic balls without facing social judgment?

The installation, called “The Beach,” is literally two massive, gallery-white pools, built by Brooklyn design firm Snarkitecture, filled with plastic balls that fully grown adults can actually play in. It is reportedly very large and very fun, and is accompanied by a few dozen beach chairs.

You can see more photos here and here.

This is offensive to real ghosts. Straight from the source:

Tim Concannon, prosecuting at Portsmouth Magistrates’ Court, said: “This defendant was effectively singing loudly and being disrespectful in among the graves.
“He was throwing himself backwards, waving his arms about and going ‘wooooooo’. I’m assuming he was pretending to be a ghost.”
Stallard [the defendant] had accepted at an earlier hearing that his behaviour could have been seen to cause distress to grieving relatives, and had pleaded guilty.

Related to yesterday’s post is another harrowing true story about a mysterious body of water in the middle of a vast desert. Unlike that inexplicable Tunisian lake, though, the origins of this hidden swimming pool are no enigma: it is the work of an artist named Alfredo Barsuglia, who “created the minimalist sculpture to nod to other monumental works of desert-bound land art.” 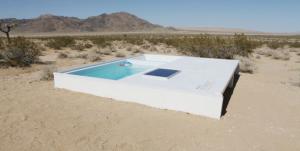 GPS coordinates can be obtained, along with the key, by visiting the MAK Center for Art and Architecture in West Hollywood, where the Austrian-born Barsuglia was a fellow last year. You can’t call to see if the key is there, and you can’t reserve it ahead of time. Of the destination, the artist will only say that it requires “several hours of driving from Los Angeles, plus a willingness to walk a long distance to reach the pool from the nearest road.”

What fun! Quirky, playful installations like these make the world a more interesting place. You can read more here.

Talk about an embarrassing clerical error:

Pennsylvania government authorities admitted they mistakenly sent out more than 14,000 military draft notification letters to men who were born between 1893 and 1897, calling it a “serious” glitch at the hands of a computer inputting error.
The notices from the Selective Service System were mailed to at least 14,250 men born more than a century ago — all believed to be dead — warning them that failure to register is “punishable by a fine and imprisonment,” The Associated Press reported.
“I said, ‘Geez, what the hell is this about?’ ” said Chuck Huey, 73, about the notice he received that was addressed to his late grandfather, Bert Huey, who was born in 1894, served in World War I, then died in 1995 at the age of 100, AP reported.

Oops! What I wonder, though, is how many of those addresses were correct. Did many of them go to the men’s descendants? How many of the 14,000 were no longer legitimate mailing addresses at all? At any rate, you can read the full article here.

This may be the most perfect headline ever written, and I am so glad to live in a world where such absurd things sometimes happen.

The distinguished gentleman in question was a member of the Royal Society; the venue, the Bristol Old Vic; the tune, Handel’s Messiah.

Before the performance, [Bristol Old Vic Artistic Director] Mr Morris invited the audience to bring their drinks into the standing area in front of the stage and instructed them: “Clap or whoop when you like, and no shushing other people.”
But Dr Glowacki, a Royal Society Research Fellow, was so overcome during the ‘Hallelujah Chorus’ he began lurching from side to side with his hands raised and whooping before attempting to crowd-surf, witnesses claimed.
Irritated by the distraction, audience members proceeded to physically eject the Bristol University academic from the area, in what Mr Morris claims is the first such incident at a classical concert since the 18th century.

That man is an inspiration to all of us. Original article here.