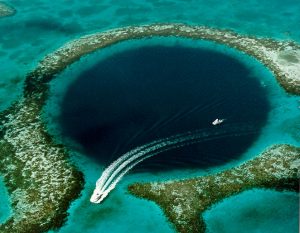 As if the creature’s physical characteristics weren’t interesting enough on their own, researchers gave it one of the coolest names in the animal kingdom: the ninja lanternshark. This shark can be found in the deeps off the Pacific coast of Central America, and grows to about 1.5 feet in length.

Like other lanternsharks, it produces light with special organs in its body, which is likely used to communicate with other sharks, for camouflage and perhaps to attract prey. The scientists who first found the fish, from the Pacific Shark Research Center in California, gave the species the technical name Etmopterus benchleyi. It’s named after Peter Benchley, the author of Jaws. […] The animal lives in the waters off the continental slope, at depths of 0.5 to 0.9 miles deep, where it is very dark. It presumably eats small fish and crustaceans although scientists don’t yet know hardly anything about its diet or behavior.

You can read more about this intriguing creature here!